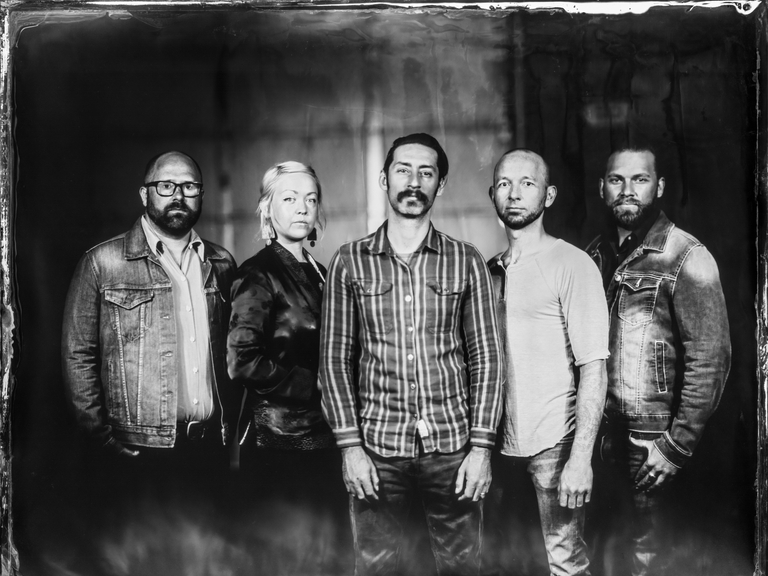 Buy Tickets
Friday, November 12, 2021
Door: 8pm
$22
Ottobar
On the surface, Murder By Death is a Bloomington, IN quintet with a wry, ominous name. But behind the geography and moniker is a band of meticulous and literary songwriters matched by a specific brand of brooding, anthem-riding balladry and orchestral indie rock. Murder By Death’s path began in the early 2000s as most Midwestern college-town groups do, by playing to small crowds at ratty venues and frenzied house parties. While many of their formative-year scene-mates failed to make it much further than campustown’s borders, Murder By Death translated their anonymous beginnings into a 10+ year career founded on a bedrock of five full-length albums, tireless D.I.Y. touring and performing ethics, and, most importantly, a dedicated, cult-like fanbase. Since the band began in 2001, their audience has blossomed due in part to extended tours alongside similarly hardworking musical kin such as Against Me!, Gaslight Anthem, Lucero, William Elliott Whitmore, Ha Ha Tonka, and others. Through more than 1,000 performances across the United States, Canada and Europe, Murder By Death has gained word-of-mouth devotees and support from the likes of media outlets like SPIN Magazine, who said of the band, “They brawl like Johnny Cash’s cellmates or dreamily swoon like Nick [Cave], stomping saloon floorboards in 4/4 time as grand strings fade into high noon.” What resonates most with supporters is the band’s energetic, unique, and altogether consistent sound and conceptualized vision. The personnel and ingredients of the group consist of Sarah Balliet’s throaty cello melodies, singer/guitarist Adam Turla’s booming baritone vocals and brawny guitar strumming, drummer Dagan Thogerson and bassist Matt Armstrong’s locked-down, post-punk rhythm section interplay, and Scott Brackett’s (formerly of Okkervil River and Shearwater) multi-instrumentalist bag of tricks (including piano, trumpet, accordion, mandolin, vocals, percussion). The overriding sound is an amalgamation of textures ranging from dark and desolate to upbeat and brightly melodic, all of it landing somewhere under the orchestrated indie rock umbrella. The other mainstay signature element of Murder By Death’s identity has been built by the overriding concepts behind each individual album. Every successive effort conjures up fresh imaginative and tactile worlds – whether it’s the battle between the Devil and a small Western town (Who Will Survive and What Will Be Left of Them?, 2003), an arid land of death and redemption (In Bocca al Lupo, 2006), or just songs inspired by a retreat into the Tennessee mountains (Good Morning, Magpie, 2010). On September 25, the band releases their newest full-length and Bloodshot Record’s debut Bitter Drink, Bitter Moon. The album was written throughout 2011 in a basement in southern Indiana, and recorded in winter 2011 in Dallas, TX with producer-in-demand John Congleton (Explosions in the Sky, St Vincent, Black Mountain).